A & B Paint Supply and PPG Paints Support Small-Town Beautification

The small town of Streator, Illinois, is in the midst of a comeback. Located about a two-hour drive outside Chicago, Streator is perhaps best known to locals for its proximity to a popular state park. Streator has fallen on hard times in recent years, but now it’s back on the map as a destination all its own thanks to a unique art project supported by local artists and the small business community.

“Back in the ‘80s, Streator was the hangout place,” recalls Brian Layhew, general manager of A & B Paint Supply, a six-store, family-owned business in the area. Then, like many smaller towns, Streator experienced what Layhew calls “a downward spiral,” thanks to drug and crime problems. 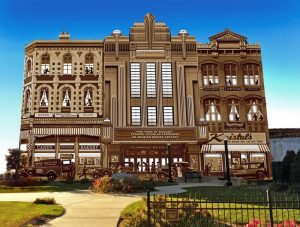 Now, that’s starting to change. In October, the town dedicated a large new mural in its downtown area. Known as the Heritage Park Vintage Wall, the mural covers the façade of an old building adjacent to a small park. It depicts a 1920s scene with an unmistakable attention to detail.

Layhew knows about the project firsthand. Through A & B Paint Supply, he worked with local artist Ray Paseka to find the right tools for the job. Paseka, who came up with the idea for the mural, told Layhew that he wanted to buy locally for all the project’s needs. Together, they settled on an industrial coating from PPG Paints and roller covers from Pro Roller Co., another family-owned business.

“Pro Roller really knocked it out of the park, along with PPG Paints,” Layhew says.

Coordination and funding for the mural project went through North Central Illinois (NCI) ARTworks, an organization that focuses on supporting local artists, economic development and cultural tourism. When the budget was strained, though, Layhew and his colleagues pitched in. A & B Paint Supply donated brushes, tape and other supplies, while PPG donated a satin clear coating to finish off the mural.

With the mural complete, Paseka and his team have their sights set on more beautification projects in the area. “This mural is a stepping stone to the Silo Pathways project,” Layhew says. 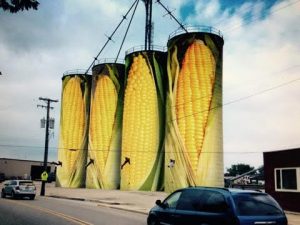 He’s referring to a large-scale effort to turn Illinois’ old and abandoned grain silos into unique photo opps and tourist destinations. Paseka and NCI ARTworks hope to transform the classic structures into works of art that reflect the small towns nearby. First up, the town of Mendota will see four grain silos turn into larger-than-life ears of corn, in honor of the town’s annual sweet corn festival.

“The ultimate goal is to turn it into a tourist thing,” Layhew says. “It’s a really ingenious way of bringing small towns to a recognizable list.”

Layhew and his family’s business will be there to support the silo projects, too. In fact, A & B Paint Supply seems poised to support the community at even a moment’s notice. Recently, someone spray-painted several swastikas in and around downtown Streator. Layhew heard about the incident on morning radio. When he got to the store, he mobilized his team. Layhew coordinated with the local police department to identify all of the tagged locations. Then, the A & B Paint Supply team used a PPG Paints graffiti-removal product to erase the swastikas from storefronts, windows and even someone’s car.

Now, the community of Streator has less graffiti and a new mural in and around downtown. As the beautification efforts continue, it’s clear that the small business community will lend a generous hand. For more information about A & B Paint Supply, visit www.abpaints.com.