A significant share of locally owned businesses are struggling to secure the financing they need to grow.  Our 2014 Independent Business Survey found that 42 percent of local businesses that needed a loan in the previous two years had been unable to obtain one.  Another survey by the National Small Business Association likewise found that 43 percent of small businesses who had sought a loan in the preceding four years were unsuccessful.  Among those who did obtain financing, the survey found, “twenty-nine percent report having their loans or lines of credit reduced in the last four years and nearly one in 10 had their loan or line of credit called in early by the bank.”

Other research shows that the businesses having the most difficult time financing their growth are those owned by women and minorities, startups, and very small businesses (under 20 employees).

One consequence of this credit shortage is that many small businesses are not adequately capitalized and thus are more vulnerable to failing.  Moreover, a growing number of small businesses are relying on high-cost alternatives to conventional bank loans, including credit cards, to finance their growth.  In 1993, only 16 percent of business owners reported relying on credit cards for financing in a federal survey.  By 2008, that figure had jumped to 44 percent.

The difficulty small businesses are having in obtaining financing is a major concern for the economy.  Historically, about two-thirds of net new job creation has come from small business growth.  Studies show locally owned businesses contribute significantly to the economic well-being and social capital of communities.  Yet, the number of new start-up businesses has fallen by one-fifth over the last 30 years (adjusted for population change), as has the overall number and market share of small local firms.  Inadequate access to loans and financing is one of the factors driving this trend.

Unlike large corporations, which have access to the equity and bond markets for financing, small businesses depend primarily on credit.  About three-quarters of small business credit comes from traditional financial institutions (banks and credit unions).  The rest comes primarily from finance companies and vendors.

At the beginning of 2014, banks and credit unions had about $630 billion in small business loans — commonly defined as business loans under $1 million — on their books, according to FDIC.  “Micro” business loans — those under $100,000 — account for a little less than one-quarter of this, or about $150 billion. (One caveat about this data: Because of the way the FDIC publishes its data, this figure includes not only installment loans, but credit provided through small business credit cards.)

Crowd-funding has garnered a lot of attention in recent years as a potential solution to the small business credit crunch.  However, it’s worth noting that crowd-funding remains a very modest sliver of small business financing.  While crowd-funding will undoubtedly grow in the coming years, at present, it equals only about one-fifth of 1 percent of the small business loans made by traditional financial institutions.  Crowd-funding and other alternative financing vehicles may be valuable innovations, but they do not obviate the need to address the structural problems in our banking system that are impeding local business development.

Since 2000, the overall volume of business lending per capita at banks has grown by 26 percent (adjusted for inflation).  But this expansion has entirely benefited large businesses.  Small business loan volume at banks is down 14 percent and micro business loan volume is down 33 percent.  While credit flows to larger businesses have returned to their pre-recession highs, small business lending continues to decline and is well below its pre-recession level.  Growth in lending by credit unions has only partially closed this gap.

There are multiple factors behind this decline in small business lending, some set in motion by the financial crisis and some that reflect deeper structural problems in the financial system.

It’s not simply that big banks have more lucrative ways to deploy their assets.  Part of the problem is that their scale inhibits their ability to succeed in the small business market. While other types of loans, such as mortgages and car loans, are highly automated, relying on credit scores and computer models, successfully making small business loans depends on having access to “soft” information about the borrower and the local market.  While small banks, with their deep community roots, have this in spades, big banks are generally flying blind when it comes to making a nuanced assessment of the risk that a particular local business in a particular local market will fail. As a result, compared to local community banks, big banks have a higher default rate on the small business loans they do make and a lower return on their portfolios, and they devote far less of their resources to this market.

More than thirty years of federal and state banking policy has fostered mergers and consolidation in the industry on the grounds that bigger banks are more efficient, more effective, and, ultimately, better for the economy.  But banking consolidation has in fact constricted the flow of credit to the very businesses that nourish the economy and create new jobs.

One small but important part of the small business credit market are loans guaranteed by U.S. Small Business Administration (SBA).  The goal of federal SBA loan guarantees is to enable banks and other qualified lenders to make loans to small businesses that fall just shy of meeting conventional lending criteria, thus expanding the number of small businesses that are able to obtain financing.  These guarantees cost taxpayers very little as the program costs, including defaults, are covered by fees charged to borrowers. 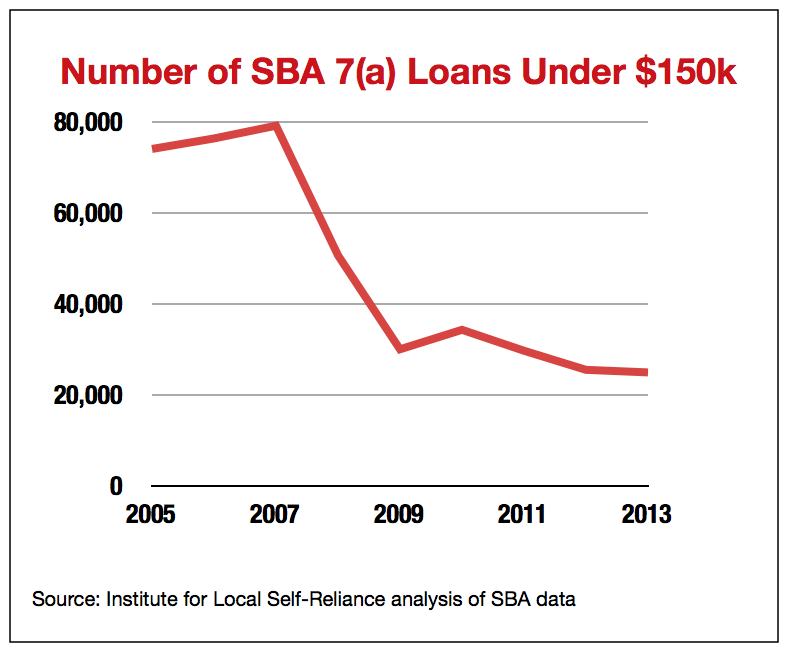 Although federal guarantees are particularly important for very small businesses, which are having an especially tough time in the conventional loan market, the SBA has dramatically reduced its support for very small businesses over the last few years and shifted more of its loan guarantees to larger small businesses.  (The SBA’s definition of a “small” business varies by sector, but can be quite large.  Retailers in certain categories, for example, can have up to $21 million in annual sales and still be counted as small businesses.) The number of 7(a) loans under $150,000 has declined precipitously.  In the mid 2000s, the SBA guaranteed about 80,000 of these loans each year, and their total value accounted for about 25 percent of the loans made under the program.  By 2013, that had dropped to 24,000 loans comprising 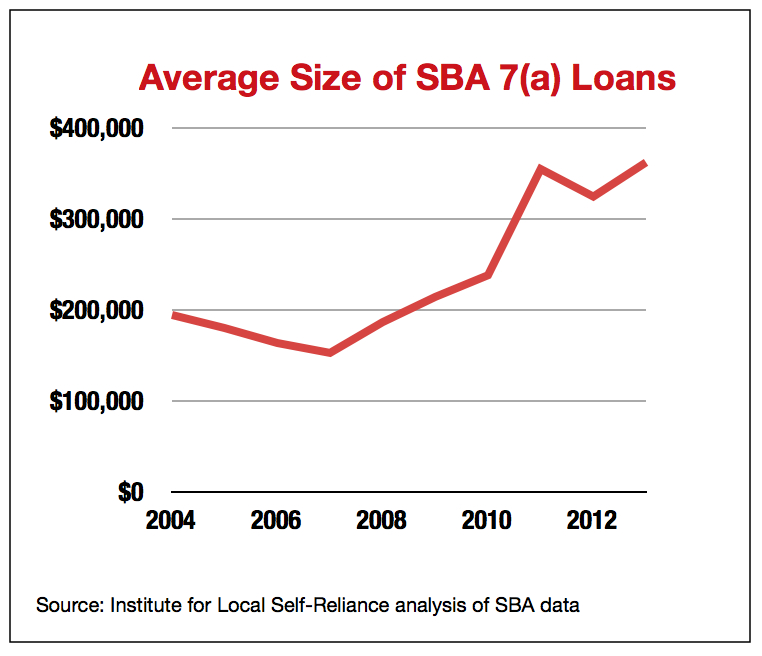 What has caused this dramatic shift is not entirely clear.  Although the SBA claims it has tried to structure its programs to benefit the smallest borrowers, critics point to policy changes in 2010 that raised the 7(a) loan cap from $2 million to $5 million. The move, which large banks advocated, has helped drive the average loan size up and the number of loans down.

Policymakers should enact policies to strengthen and expand community banks, which provide the bulk of small business loans but are shrinking in both number and market share.  At the federal level, we encourage regulators to address the disproportionate toll that regulations adopted in the wake of the financial crisis are taking on small banks, adopt measures to reduce concentration in the banking system, and increase new bank charter approvals, which have plummeted in recent years.  At the state level, policymakers should consider the advantages of creating a publicly owned partnership bank, modeled on the Bank of North Dakota, which has boosted the numbers and market share of small private banks in the state, and, in turn, led to significantly higher levels of small business lending than in the rest of the country.

Current regulations limit business loans to no more than 12.5 percent of a credit union’s assets.  Although some have called for lifting this cap, AIB favors another proposal, which would exempt loans to businesses with fewer than 20 employees from the cap.  This would ensure that new credit union lending benefits truly small businesses, rather than simply expanding large business lending by a few large national credit unions (the only ones close to hitting the current cap).

The SBA should return to the previous size cap of $2 million on 7(a) loans and adopt other reforms to ensure that federal loan guarantees provide more support to very small businesses.  The SBA should also shift a share of of its loan guarantees into programs that are designed primarily or exclusively for small community banks, which specialize in small business lending.