Award-Winning Burney Hardware Makes Giving Back Part of the Policy

“In 2021, the store is going to be 100 years old,” says Kristy Ransdell, co-owner of Burney Hardware. “That’s not easy these days with all the chain stores.”

The family-owned store opened in Aberdeen in 1921. At the time, Gus Burney, the store’s namesake, ran the operation. When he retired shortly before 1960, he sold the business to his employees. According to Ransdell, her family purchased the business in 1982, keeping the original name and legacy intact.

Over the years, the Ransdell family has built a successful business and a growing community. Each year, Burney Hardware welcomes new Habitat for Humanity homeowners to their county by offering items such as a toolbox or a $100 gift certificate.

“Last year, we gave a toolbox full of tools to each homeowner, but Habitat told us that what these homeowners really need is equipment to take care of the yard. Many of these new homeowners have never had a yard before,” says Ransdell. “So this year, we are giving gift certificates instead. That way, they can come get what they really need.”

Burney Hardware also offers paid time off to employees who want to spend a workday down at the local Habitat job site. 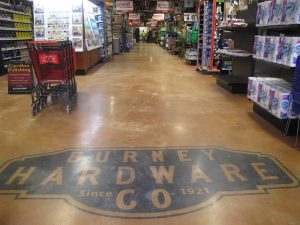 Meanwhile, much of the charitable work is done right on Burney Hardware’s property. There’s a metal shop out back where some of the store’s employees do welding, says Ransdell. Many of the items created in the metal shop end up auctions and raffles to support local organizations.

“We have a free care clinic in the area, and we partner with a local church that has, for five years now, done a fundraiser with a silent auction, where all the money goes to the clinic,” Ransdell says. “Last year, we also auctioned off a tree made in the metal shop for a local children’s center that cares for children with autism or developmental disabilities. The tree brought in almost $900.”

If it sounds like the Burney Hardware team will help anyone who asks, they will. Believe it or not, it’s part of the store’s policy.

“Anybody who asks us for a donation and brings us their event flyer, we will make a donation,” Ransdell says. “That’s our policy – don’t say no.”

Ransdell’s own experience with asking for donations may have something to do with Burney Hardware’s policy. She tells the story of a time she was tasked with procuring donations for a local committee. She entered a chain store with a seemingly endless supply of items on display, but the store manager told her there was nothing he could give.

“It’s not fun when you have to ask for donations,” Ransdell says. “If you have a local business you can count on, that’s awesome. We want to be one of those awesome stores.”