Consumers are Paying More Attention to What They Eat

... Especially when it comes to red meat.

This is largely the result of a 2015 Consumer Reports study highlighting the health risks of ordinary grain-fed beef and a report from WHO (World Health Organization) classifying processed red meat (i.e. hot dogs, bacon, salami) as a group 1 carcinogen.

Cambridge, Massachusetts resident Mike Salguero did everything he could to find grass-fed beef locally. His friend from upstate New York introduced him to a local farm which sold freshly butchered shares of livestock. The problem was that Mike had to buy a few hundred pounds of beef at a time. Enough to fill two industrial size trash bags and force a freestanding freezer purchase. After several months of splitting up meat and selling shares to friends, Mike decided to find (or rather create) a new solution.

In September of last year he and his co-founder Mike Filbey launched a Kickstarter campaign for ButcherBox. The plan was to unite a collective of grass-fed beef ranches and offer doorstep delivery to consumers on a simple monthly membership basis. Within 18 hours of launching their 30 day campaign, their project was over 100% funded. They were blown away. All said and done they raised $210,203 (840% of their $25,000 goal).

Their new goal is to make 100% grass-fed beef more accessible than ever before. But they’re going to need help from the little guys to get there. The big beef companies don’t focus on grass-fed because it’s far more expensive to produce. The cattle need more land, care, and live longer lives (making for a longer ‘sales cycle’). As little as 1% of the beef produced in the U.S is 100% grass-fed and it’s spread out across hundreds of small, often family run ranches. This makes sourcing quality product a serious challenge. But one that ButcherBox is taking head on. 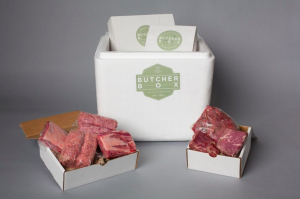 Each month they feature either a new ranch or type of cut, sometimes both. This month they’re featuring a beef shoulder from White Oak Pastures. A family owned, five generation ranch located in Bluffton Georgia. Along with the meat, each ButcherBox member receives a letter about the farm and recipe cards to go with each cut.

Ranchers are jumping at the opportunity to become a supplier because many of them lack the resources necessary to advertise and distribute their beef. Through partnering with a collective of ranches, ButcherBox is supporting the local community and providing a highly sought after substitute to conventional grain-fed beef.

The company is always looking for more local sources of 100% grass-fed beef. We invite you to email them if you have any recommendations. 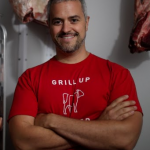 I am the founder of ButcherBox. But more importantly, I'm a husband, father, and over-loving dog owner. I try to start each day with a CrossFit workout, eat a paleo diet, and go to as many farmers markets as I can. I love building brands focused on real products and real people.