On July 4, 2016, Independent We Stand, STIHL Inc., and FCA US BusinessLink recognized the Lynden Downtown Business Association (DBA), in Lynden, Washington, as the $25,000 winner of the first ever “America’s Main Streets” contest. Downtown Lynden showed its community pride and patriotic spirit by celebrating its downtown businesses during a big block party to thank its residents for their participation during the three-month-long contest. Hundreds of locals enjoyed free music, food and family activities throughout the afternoon.

To announce their plans for the prize winnings Independent We Stand and Lynden Downtown Business Association organized an official award ceremony; during which, July 4, 2016 was officially proclaimed as Downtown Lynden, America’s Main Street Day by Mayor Korthuis of Lynden.

“The Lynden community has been blessed with numerous projects, that have kept Downtown a vibrant destination for locals and visitors alike,” says Mayor Korthuis.

“Winning this contest is huge,” says Stap. “This award will play a major role in helping re-establish Lynden’s downtown as the heart and soul of our community, for residents and visitors alike.” 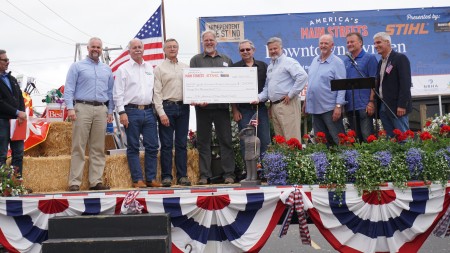 As the winner of the first ever America’s Main Streets contest, the Lynden DBA was awarded with a $25,000 cash prize, doubling their annual budget. Here’s the breakdown of how they plan to spend the money:

For more on the event, watch the Facebook live stream of the July 4 award ceremony: