Every year, Lake Havasu City invites thousands of residents and visitors to experience its unique culture with Winterfest, a two-day event filled with entertainment and vendors of all kinds. The annual celebration brings crowds of people to downtown’s McCulloch Boulevard, but it posed a challenge for at least one local business on the block. After dreading the crowds for several years, Havasu Hardware found success by embracing this beloved town tradition.

“It killed our business,” says Erica McCorkle, part-owner and manager of Havasu Hardware. The Do it Best Corp. hardware store, which is owned by McCorkle’s family, sits right on McCulloch Boulevard. Its proximity to Winterfest meant that Havasu Hardware’s parking spots were filled with festival-goers, rather than customers.

“Every weekend that his event would come up, we would dread it because we’d see all the people out there, but nobody would come in,” McCorkle explains.

In recent years, however, Havasu Hardware has gone from a skeleton crew to an all-hands-on-deck operation during Winterfest weekend. Things started to change when McCorkle’s family realized an opportunity.

Eventually, it wasn’t just McCorkle’s dad sitting in the parking lot. The team set up several tents and displays and invited various vendors, including Do it Best Corp. “It was one of our best weekends, better than what we do in a month sometimes,” McCorkle says. 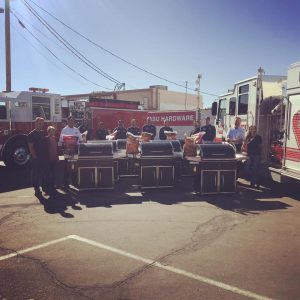 Now, Havasu Hardware embraces the Winterfest event. This year’s Winterfest takes place Feb. 10-11, 2018, and Havasu Hardware is sure to be ready, grilling up everything from cinnamon buns to pork tenderloins and welcoming the community to its storefront.

Read more about Do it Best Corp, Havasu, Indie Acts of Kindness.