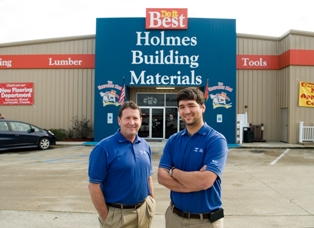 Founded in 1956, Holmes Building Materials is the work of four generations of the Holmes family. After graduating from college, John Holmes joined the family business to work alongside his father, as his grandfather retired. Now, Holmes is working alongside his 32-year-old son, Matthew, who will soon take over the operation.

“It’s not that I’m excited about getting out of the way,” Holmes says of his impending retirement. “I just want to make sure I’m not in his way.”

The Holmes family employs more than 100 people in the Baton Rouge area. In August, 50 of them suffered from the severe flooding that devastated the region. The floods killed 13 people and damaged 60,000 homes. According to the White House, more than 100,000 people applied for federal aid because of the situation.

Holmes called the floods “the largest natural disaster that our community has ever seen, worse than any kind of hurricane that we’ve seen in my lifetime.”

With so many houses in peril and employees struggling to get back to work, Holmes Building Materials turned its focus to giving back. The company offered advances and disaster relief loans to help employees get back on their feet. Then, the company looked outside its folds.

“We decided that we needed to help some of the elderly in our marketplace, who were uninsured and who really had, with fixed incomes, no means of getting back into their homes,” Holmes says.

Working with three of its partner manufacturers, Georgia-Pacific, Knauf Insulation and Masonite Corporation, Holmes Building Materials offered to help rebuild 30 homes in the community by donating building materials, such as insulation, drywall and interior doors. The company turned to local charitable groups to identify the elderly homeowners in the most need. Nearly three months after the floods, the Holmes team donated to its 32nd home in November.

“We’re working through local churches and nonprofits,” Holmes says. “We’ve got the manufacturers’ support. We’re matching every dollar that we’re able to bring in immediately and we’ll cover whatever shortfall we have at the back end.”

Despite the tragedy that caused all of the damage, Holmes calls the recovery work that his company is able to do “a lot of fun.” It’s building a better connection between Holmes Building Materials and the employees, the local churches and nonprofits and the community, he says.

Beyond the flood recovery efforts, Holmes Building Materials works with several other causes on an annual basis, including the Boy Scouts of America, the American Diabetes Association and local hospitals. Whether in an emergency situation or just another day of doing business, Holmes says that the work comes from his connection to the community.

“It’s our home,” he says. “You try to make the place you live better.”