Locally owned family businesses are something that brothers Craig and Jeff Smith know very well as their fathers' local pharmacy in Bethesda, MD was a crucial part of their upbringing. In the Bradley Shopping Center was Strosniders Hardware, a well-known local hardware store purchased by the family in 1984. The ownership of this store helped them to learn the ins and outs of the hardware business and was the first introduction of Craig and Jeff into an industry that inspired them.

As the years progressed, Craig lived in a couple of places looking for a career path that inspired him but ultimately ended back in Bethesda helping his father with his locally owned and operated businesses. Craig and Jeff wanted to start something on their own, so they first opened Twins Ace Hardware in 2011 in Fairfax, Virginia, and later opened a second location in Arlington in 2016. Supporting the local community is something that the brothers strive to do, and they offer support 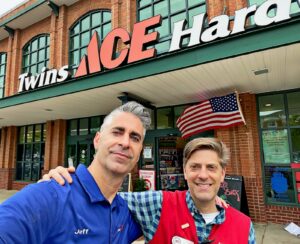 “When the community comes to us with a need for something, we avoid saying no, and do our absolute best to provide them with the things they need", says Fairfax owner Craig Smith.

The Smith brothers care a lot about their local communities in Fairfax and Arlington and support the areas by providing jobs to the locals in addition to working with local non-profit organizations. They're keeping the family business going as Craig's children have gotten very involved in the business. Zachary, 14, and Samantha, 11 have both begun working at Twins Ace Hardware this past summer where they've helped with cleaning the store, merchandising, and even helping customers on occasion.

When asked about his desire to own a local business, Jeff Smith says, “We could be a big box store or a website, there’s not a lot of heart or enthusiasm in that…we love to be involved in the community, they support us and we support them."

It's important to the Smith brothers that they give back to those in need, but one of their longest relationships has been with the Children’s National Hospital. Craig has a personal connection with the hospital as he was a patient when he was very young for a minor operation. He believes it’s extremely important that the children at the hospital receive the medical attention they need, which is why Twins Ace Hardware provides donations and runs fundraisers for the organization. In early 2021, the hospital has asked Craig to join their Corporate Advisory Council, which has strengthened the relationship between the two organizations.

Craig and Jeff Smith understand the importance of local businesses to the local economy, which is why they try their best to be as helpful and involved in their communities as they can be.