After the review of the more than 200 nominated businesses, Howard Brothers Hardware was chosen as one of five finalists for the Independent We Stand "Independent Business of the Year Award." This was based on their above and beyond attitude toward customer service and community involvement. Thanks to their dedicated fans, Howard Brothers Hardware won the ‘Indie Award’ with almost 45,000 votes.

Brothers John and Doug Howard of Howard Brothers Hardware reconfirmed our belief that they deserve Independent We Stand’s first ‘Indie Award’ when we called to inform them that they had won. While they were ecstatic about being crowned the winner, John and Doug recognized that some of their fellow finalists needed their prizes more than Howard Brothers Hardware. Their current website is up to date (www.howardbrothers.com), so they donated the website design by Launch Interactive to Mummphy’s Book Nook. Mummphy's doesn't currently have a website so owners Jon and Rose Mumford were blown away when they heard the news. 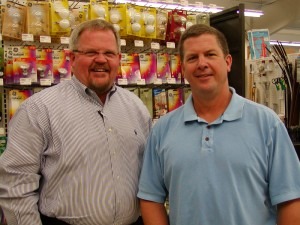