In 2006, a group of Portland, Maine, business owners launched a campaign to support their work in the community. In 2016, Portland Buy Local, a campaign of the Portland Independent Business & Community Alliance, celebrated its 10th anniversary with 445 local business members and a decade of growth. Now that Portland Buy Local has entered its second decade, the program has plans to sustain Maine businesses for years to come. 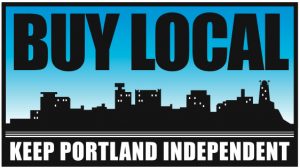 Portland Buy Local began with a mission to counteract the rising influence of national chains. The organization has created a unified brand for Portland’s local businesses to leverage through window decals, posters, bumper stickers and more. In recent years, Portland Buy Local’s work has expanded to incorporate advocacy and recognition.

In 2015, Portland’s businesses saw an average commercial rent increase of 22 percent. Portland Buy Local also reports that rising commercial rent is a top concern for almost a third – 31 percent – of the city’s independent businesses. This shadows a national trend: In the Institute for Local Self-Reliance’s 2016 Independent Business Survey, 59 percent of independent business owners reported being worried about the escalating cost of rent.

During its tenth-anniversary year, Portland Buy Local secured a $2,500 grant from the city’s development corporation to host a community forum focused on policies that would strengthen the local economy. As small businesses struggle to keep up with rising rents and face increased competition from online retailers and national chains, the forum is a way for the community to focus on and work together to protect the independent businesses that keep Portland diverse and vibrant. This year’s community forum will take place on September 28 at the University of Southern Maine.

Looking ahead, Portland Buy Local seems poised to build on its first decade of growth. This year, the group will host its second-annual Indie Biz Awards in October. Portland Buy Local will also leverage a newly launched online member forum and a media partnership program, which provides members with increased access to locally owned media. To follow along with Portland Buy Local’s second decade, visit www.portlandbuylocal.org.