Cornell’s: Center of Westchester Since 1909

Spanning more than a hundred years and three generations of the local Fix family, Cornell’s True Value Hardware has become one of the oldest and most unique businesses in Westchester County, New York. Over time, the business passed from family to family and town to town, but now, it is passed from generation to generation.

Cornell’s was originally incorporated in 1909 by brothers Bailey and Charlie Cornell in the town of Tuckahoe. Soon after, 14-year-old John Fix began working at the store, part-time, after school and on the weekends. Over the years, John gained shares of the business, and in 1932, he bought the business from the Cornell brothers completely to keep the store viable throughout the Great Depression. Since then, the hardware store has grown to include more than one Fix and more inventory than tools and paint.

Now in the town of Eastchester, Cornell’s is managed by the third generation of Fix family employees. John Fix III -- along with his cousin, Thomas Fix Jr., his sister, Mary Beth (Fix) Wellington, and his wife, Judy Fix – now runs the store guided by the same family values instilled in him by the previous managers, his father and grandfather.

“Our strength is personal customer service,” says John Fix III. “We often refer to our customers as our friends and neighbors because that’s what they are. Thomas and I both live in Eastchester and are active participants in numerous community organizations.”

More than just a hardware store, Cornell’s now encompasses The Brew Shop for home-brewing supplies and Just Ask Rental for outdoor equipment and party rentals. Despite this growth and progress, the Fix family continues to celebrate its long history with the store and the community it serves. In 2009, Cornell’s celebrated its 100th anniversary with special deals, contests and community events over the course of several months. In June 2009, for example, Cornell’s collected and matched donations to four community groups, including the Eastchester Rotary Club, the Eastchester Youth Council, the Eastchester Historical Society and local Girl Scout troops.

The Fix family’s commitment to supporting the community stretches beyond the walls of its store. “We make it a point to buy locally, and we’re lucky that our town has very strong zoning rules that keep out many chains,” John says. “The ‘buy local’ movement not only keeps money in the local economy, but also keeps the local character of a town. Nobody drives to the next town to get a cup of coffee from Starbucks, so it’s the locally owned, unique businesses that make a community stand out in the minds of a consumer.” 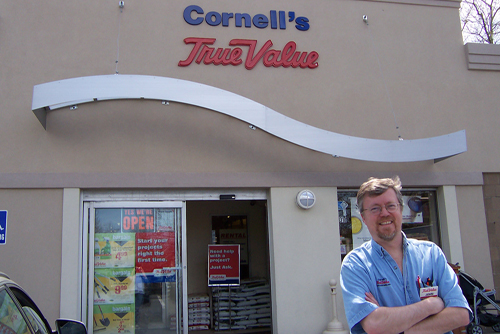