As a second-generation, family-owned business, Regal Decorating & Paint Center has a history of supporting families. In 1973, Neil Rasmussen first established the Palm Beach based Florida business, which is now owned by Neil’s oldest son, Steve. Not surprisingly, when it came time to support a family outside of Regal Paint’s folds, the PPG Pittsburgh Paint dealer stepped up to turn a house into a home. 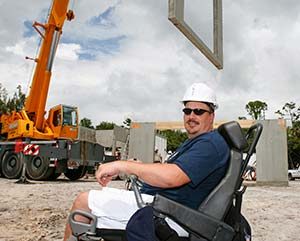 Thanks to Homes for Our Troops, that house belonged to Sgt. 1st Class Steven Holloway of the U.S. Army. SFC Holloway was severely wounded during a tour of duty in Iraq. He was struck by a sniper’s bullet while transmitting a radio call for a Medevac unit for a wounded soldier. SFC Holloway was unconscious for 10 days and required several surgeries. He was paralyzed from the waist down.

SFC Holloway’s injuries made it difficult for him to return to life at home with his family. He now required a wheelchair to get around, and the layout of his family’s townhome didn’t exactly accommodate. Narrow door frames and tight hallways make simple things like going from the kitchen to the bathroom a difficult ordeal.

Fortunately, Homes for Our Troops and several local businesses – including Regal Paint – worked together to move the Holloway family into a more accessible home. Holloway, his wife, and their four children now live in a four-bedroom, single-family home that is also handicapped-accessible.

Regal Paint joined the campaign by donating the paint needed to make the Holloways’ new home more hospitable. If you ask the Rasmussen family, the act of supporting a deserving military family won’t be a one-time occurrence. 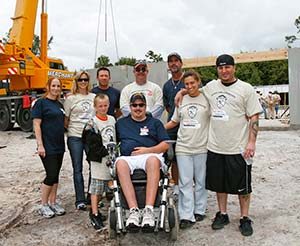 “It’s our goal and responsibility to ‘pay it forward’ to all those brave servicemen and women who fight for our safety and freedoms every day,” said Steve Rasmussen. “With something as simple as paint, we were able to contribute to this major blessing for the Holloway family.”

In a sense, the localization movement is all about families supporting families. It’s about bringing people together to make communities, businesses and families more independent. Thanks to Regal Paint and dozens of other local businesses, SFC Holloway lives more independently. For more information about Regal Paint, visit www.regalpaint.com.