When Justin South joined the military, he knew he’d be making a serious commitment, in both time and lifestyle. He understood what it all meant for his life, but he couldn’t have known what it would come to mean for his job and his employer.

South had worked for Sam Wilson, owner of Speed’s Power Equipment in Salt Lake City, for three years when he decided to enlist. Wilson, who has owned his business for 20 years, has kept South on the schedule despite his military commitment, allowing him to take as much time off as he needs, even if it’s on short notice or for a voluntary mission.

For Wilson’s commitment to his employees in uniform, South nominated him for a Patriotic Employer Award, which Wilson received from the Office of the Secretary of Defense at the end of 2014. The award recognizes employers of National Guardsmen and Reservists who show their support for the troops by offering flexible schedules, leaves of absence and other similar measures. 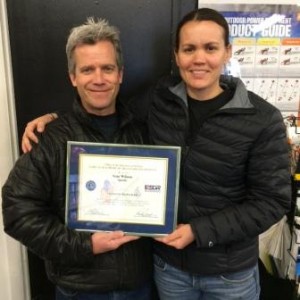 In his nomination letter, South wrote, “He gave me a raise when I returned from basic training … He allows me to come back to work after volunteering for missions overseas, puts me to work full-time and gives me my previous salary without question.”

While South is away from the store, his boss checks in with him as often as possible. When he’s back on the job, Wilson helps him find and pursue opportunities for professional development and education. Not to mention, South isn’t the store’s only employee in the military – and he’s not the only one with this arrangement, either.

“He has done these same things for other service members working for him,” South says. “Of course employers are bound by law to provide jobs for service members, but I am not sure he is even aware of this because he has never made it a problem.”

By making military service possible for many of his employees, Sam Wilson keeps his small business and his community strong. For more information about Speed’s Power Equipment, visit www.speedspower.com.

Independent We Stand is dedicated to helping independent businesses across the country engage their communities and encouraging customers to buy local. If you’re a business owner, get buy local resources, tips and news by registering at www.independentwestand.org/membership/. Your business will also be included in our ‘locals only’ search engine and mobile app. If you’re a consumer, take the pledge to buy local and find local businesses in your community at www.independentwestand.org/take-a-stand/join-the-movement/.

Alex recently graduated the University of North Carolina at Chapel Hill with B.A.s in Journalism and Spanish. Since becoming a writer for Independent We Stand, she has fully adopted the ‘buy local’ lifestyle. Her favorite indie business is Sugarland, a bakery in Chapel Hill, N.C, where she has been known to go a little cupcake crazy. She hopes to attend law school and pursue a career in nonprofit or political communication.