In 2002, husband-and-wife team Michael and Michelle Lloyd opened their Sedona Paint Center in northern Arizona’s Verde Valley. Over the years, the locally owned paint store and PPG Pittsburgh Paints® dealer has adapted to ever-changing design trends and customer preferences, expanding its inventory to reflect the latest in high-quality materials. What hasn’t changed, though, is the Lloyd’s commitment to their local community.

Michelle serves as the treasurer for the local Verde Valley Humane Society, and Sedona Paint Center has donated paint to local animal shelters and clinics for years. Michael previously installed a new floor at the Yavapai Food Council’s facility, where volunteers pack backpacks full of food to give to local children in need. Together, the Lloyds are active in their local chamber of commerce – and that’s where they recently developed a new partnership that’s right up a paint store’s alley.

“Verde Valley Habitat for Humanity presented at a chamber of commerce mixer,” Michael says. “After the presentation, we approached them to see how we could help.” 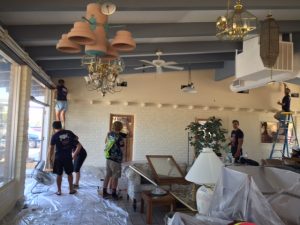 Habitat for Humanity Bike and Build

Last year, Sedona Paint Center donated paint for a local Habitat for Humanity rehab project in Sedona. The Lloyds also worked with Habitat’s Bike & Build program, which takes volunteers on a cross-country cycling adventure to various Habitat sites throughout the summer months. When Bike & Build volunteers stopped in the Verde Valley, they painted the Verde Valley Habitat’s Re-Store showroom, using paint donated by Sedona Paint Center. Before the project, Michelle worked with Habitat representatives to choose the color scheme for the store’s interior.

“They’re helping people who have faced such hardships, and it’s so important to support them,” Michelle says. “We’re so thrilled to be their partner, and I know this will be an ongoing relationship.”

For the Lloyds, it’s not just about the end result – it’s also about the work that goes into each project along the way. “The Verde Valley Habitat for Humanity has the most wonderful bunch of people,” Michelle says. “We’re just a small piece of the puzzle, but we are so proud to be in a position to help.”

In truth, Michael and Michelle have spent more than 15 years growing Sedona Paint Center to be in a position to give back. In business, they’ve been able to continue serving causes that mattered to them well before they became small business owners, such as animal welfare and affordable housing. As they continue to instill confidence in customers with their vast expertise and rich inventory, they’ll also instill confidence in their community through the causes they support.