Stan Crader got his first job when he was six years old. At a more fitting age, he joined the family business and took over the work of his father, grandfather and great-grandfather. Now the president of Crader Distributing Company, the exclusive distributor of STIHL outdoor power equipment in Missouri, Kansas, Nebraska and southern Illinois, Crader has learned the value of hard work, and he’s using his talents to serve those who work hard for all of us. 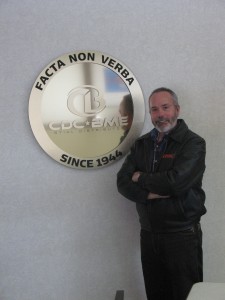 Crader has never been one to shy away from new challenges and opportunities. At age six, he began stocking shelves at a grocery store in his native Bollinger County, Missouri. “I guess it was technically a job, but it seemed like more of a privilege,” he says. “Twenty cents an hour vaulted me into the highest income bracket of anyone in the first grade.”

As a teenager, Crader was buying his own motorcycle and jumping a small creek with it. All along, he watched his father progress through equally unique experiences in his professional life. “In addition to being one of the pioneers of STIHL in America, my dad was fire chief, mayor and served on several community boards and committees,” Crader says.

Eventually, Crader took after his father in his own professional life by adding a few unique titles to his resume. Also like his father, these unique experiences stem from a desire to serve the community. He has served as a city councilman, president of the Outdoor Power Equipment Distributors of America and a board member of Resurrecting Lives Foundation (RLF).

Resurrecting Lives is dedicated to supporting veterans with traumatic brain injuries. The foundation focuses on advocacy, research, treatment and education for TBI. “Serving on the board of Resurrecting Lives has afforded me a deeper understanding of the devastating effects of TBI, the difficulty in accurate diagnosis, the need for appropriate treatment and the challenge in joining the wounded with appropriately trained and funded helping hands,” Crader says.

In his typical fashion, Crader has found his own unique way to support RLF. In addition to his other roles, he is also the author of three books, The Bridge, Paperboy and The Longest Year. The novels are loosely based on his life and inspired by his perspective of rural America in the 1950s and 1960s. Although he doesn’t consider himself an author by profession, his books have become important to RLF’s business model. Since the publication of his third novel, Crader has pledged proceeds of his book sales to the foundation.

“It was only natural that I pledge proceeds of the book sales to charity,” he says. “Early on, I chose local charities, but with publication of my third book, The Longest Year, I decided to choose a charity with a meaningful mission, a national footprint and minimal administrative expenses. The search led me to an organization with an exponentially honorable mission, serving our veterans in all quadrants of America, and best of all, an all-volunteer staff: Resurrecting Lives.”

As his bio on the Resurrecting Lives website reads, Stan Crader is a businessman, author and patriot. He has been  -- and done – many other things, and through it all he has become savvy in business and creative in giving back. Read more about Crader and get a free copy of his first novel at www.stancrader.com.