For Karen Munson, the aisles of her family’s hardware store feature more than tools, supplies and feed — they also set the scene for an entire cast of characters, performances and memories. Munson belongs to a family of independent retailers, with roots in the hardware business stretching back to 1926. Paying homage to this lineage and her own experiences, Munson is now transforming her family’s hardware store into a series of short stories.

The Munson family owns Escalante Home Center, a Do it Best Corp. member in southern Utah. The family operation sells home improvement and landscaping supplies, as well as lumber, cleansers and housewares. In the spring, customers can order baby chicks and game fowl. In the summer, the family greenhouse opens, offering native plants, flowers, trees and shrubs. There’s a little bit of everything — and lots of stories to be told.

Having grown up in the family hardware store, Munson has seen firsthand the way that her family’s work affects the community. The store is a gathering place, where customers seek inspiration, get advice from experts and ultimately turn their ideas into their dream home or garden. It’s also a place where her family works together, helping customers and employees succeed. This perspective leads Munson to publish an upcoming book of short stories, sharing her memories and reflections from the aisles of the hardware store. 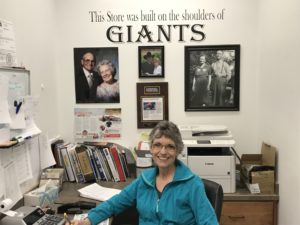 One such story introduces readers to Aisle 12 Ted, a recent transplant from California who shared his talents with Munson during one memorable trip to the store:

I was nervous about playing the part of Grant Twitchell in an upcoming community play about the Civilian Conservation Corps during the 1930s. I’d never acted in the role of a male in previous plays and wanted to get it right. When Ted came in the store one morning, I tentatively approached him. I wasn’t sure how to ask, or how he’d respond to my request, after all, I didn’t know him well, and he was a celebrity.

“Ted, could you give me some pointers on how to play the part of a man?”

“Sure!” We walked out of the power aisle into aisle 12 to have some space and be out of the way of other customers. “As you get into character, you think about his personality. Practice how you think he’d walk, adjust your voice pitch to how he’d speak. Try this…” (as he swaggered down aisle 12 past the power tools), “or this”, (he adjusted to a bouncier step approaching the sanding disks.) He demonstrated a few facial expressions and gestures for at least fifteen minutes. “It takes a lot of practice, but you’ll get it.” He added a few more tips and then returned to finding the drill bit he had come to the store for.

I was so grateful and relieved. An acting lesson from a real live actor! And I took it to heart, practicing what he’d said for the one-night performance. When I arrived in full makeup, the director didn’t even recognize me. People in the audience gasped when I spoke my lines, not knowing who it was until they heard my voice version of a male.

The following year, I was checking Ted out at the paint counter, and another customer, new to the town, approached.  “Sam, do you know Ted? He’s always pretending to be someone else.” I thought it was a clever introduction until Ted’s head whipped up to look at me with a raised eyebrow and snake eye, characteristic of some of the villainous roles he’s played.

“I don’t pretend, Karen. I act.” I felt chastened.

“I’m sorry, Ted. I didn’t mean to offend. I have the utmost respect for your craft.” And with that he went out the door.

There were many other sales, many other projects with Susann and Ted on their new home south of town. They’d relocated here from California to get away from the fires. Susann had shared with me, back on aisle 18, how they’d met, their courtship, their shared interest in horses, and how she’d fallen in love with this remote town to relocate to. She doesn’t watch any of Ted’s movies. She knows who he is.

I remember the first time I met Ted, unaware of his career. He was chilled, covered in mud, and trying to fix plumbing on the trailer they were staying in temporarily. I think he missed the California climate. He was fairly frustrated but willing to work toward living here because his girlfriend loved the place. After he’d been in the store a few times, one of our clerks recognized him from the Monk series, her favorite, and squealed, “Can I get a picture with you to send my son? He won’t believe this!” Ted graciously consented and I snapped their picture in front of the paint chip display.

Just before the Thanksgiving holiday this year, Ted’s sister, daughter, and granddaughter came to the store with him. He introduced us and we chatted for a minute while he made his purchases. I admired his granddaughter and confided to his daughter that I hadn’t seen many of Ted’s movies, but that one of my favorites is “Jimmy” about an autistic boy with a very loving devoted grandfather, played by Ted. His daughter said, “That’s how he is in real life, a very loving devoted grandfather.”

No pretending. No acting. Just Ted at his best. Real.

By engaging with customers and building a connection with the community that spans generations, independent retailers make memories that run deep. If you have a short story from your own small business experience that would make a fun addition to Munson’s book, you can share it with her emailing escalantehomecenter@gmail.com with the subject line “In the Aisle stories.”

Read more about Do it Best Corp.