If you’re a college basketball fan, you know that March means madness. It’s a competitive month on the court – and the competition isn’t always friendly. In South Dakota, two local Do it Best Corp. hardware stores formed a competition of their own this past March, but they kept things friendly by encouraging their communities to give back.

Dakota Do it Best Hardware in Sturgis, South Dakota, and Heisler’s Hardware in nearby Spearfish sit about 20 miles from each other in the western part of the state. At the end of February, Dakota Do it Best announced an upcoming food drive in its store. Seeing the announcement, Heisler’s Hardware decided to join forces. Together, they turned the food drive into a friendly competition to see which store could bring in the most donations for its local food bank.

“I always watch Dakota Do it Best’s social media because they always do fun social media promotions,” says Pam Heisler of Heisler’s Hardware. “I thought it would be fun to join together as two stores and two communities working together to better our food pantry.”

As it turns out, the two small businesses already had experience working together.

“Being co-op members though Do it Best Corp., we rely on each other for little things,” says Callie Bowman of Dakota Do it Best. “I’ve never viewed it as a competition, so I thought this food drive would only complement our relationship.”

Bowman came up with the idea for a March food drive after visiting the local food bank with her own donations. “There was a lot of people in there, and it didn’t look like there was a lot of food on the shelves,” she says. “There are certain times of year when it’s easier to think about giving back, like Christmas and Thanksgiving, but March is a time when you don’t necessarily have the mindset of giving back.”

“These are small communities here, and I think it’s important to remind people that the small business still has a place in the world,” Bowman says. 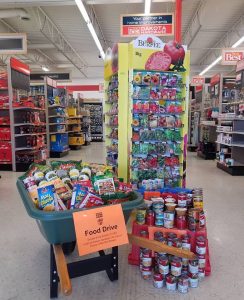 This story is part of our ongoing ‘Local Memories, Lasting Impact’ series that highlights small, locally owned businesses and the differences they make in their communities.