After an incredible display of support for Main Streets from coast to coast, we are pleased to recognize Downtown Lynden, formally known as Lynden Downtown Business Association, in Lynden, Wash., as the $25,000 winner of the “America’s Main Streets” contest. As a top ten finalist, Downtown Lynden, population 12,902, stood out among its fellow Main Streets with the most votes, after more than 280,000 total votes were cast by the public nationwide during the contest. 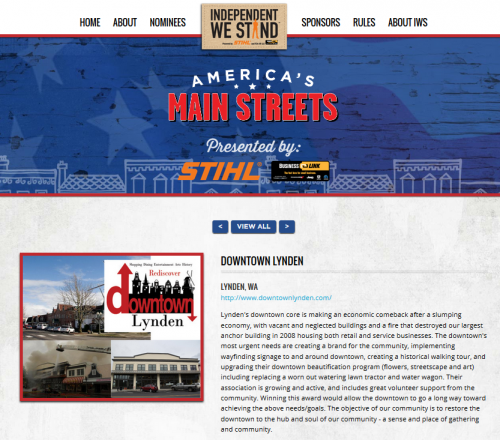 Downtown Lynden exemplifies the spirit and tenacity of small businesses to nurture community growth and empower one another in both good and tragic times.

In June 2008, a fire destroyed Downtown Lynden’s largest anchor building, a historic three-story building housing nearly a dozen independent businesses. In the years since, a growing and active Lynden Downtown Business Association began rebuilding with the help of local investors and volunteer support from the community. Their mission, to help the downtown core make an economic comeback. Some of their needs and goals include: creating a brand for the community, implementing wayfinding signage, creating a historical walking tour and upgrading their downtown beautification program.

“Coming back from ruins after a devastating fire right as the great recession took hold in 2008 is just the type of community engagement and support Independent We Stand recognizes and promotes across the country,” said Bill Brunelle, co-founder of Independent We Stand. “We can’t wait to see the improvements they’re able to make with this prize and how those improvements will benefit independent businesses in Lynden.”

Already well-known as the world’s largest producer of raspberries, Lynden is also known for its Dutch heritage. The downtown area also features a prominent windmill housing a hotel and is brightened by more than 150 hanging flower baskets plus flower beds on every street corner. It’s this charm Lyndenites would like to share with others.

“Winning this contest is huge,” said Ken Stap independent business owner and president of the Lynden Downtown Business Association. “This award will play a major role in helping re-establish Lynden’s downtown as the heart and soul of our community, for residents and visitors alike.”

Next up for Downtown Lynden, a Fourth of July “Main Streets Make Us Better” press conference to reveal more detailed plans for the $25,000 grand prize.

In addition to the grand prize of $25,000, Lynden Downtown Business Association will also receive: a $1,000 STIHL equipment certificate, redeemable at any independent servicing dealer in the U.S., a Tire Pros $500 certificate towards a set of Continental tires, a Do it Best Corp. $500 shopping spree, a PPG Pittsburgh Paints $500 shopping spree, public relations and social media recognition, an Alignable small business social media “Neighborhood,” and a special plaque to proudly display.

The 2016 semifinalists, of the America's Main Streets Contest, in alphabetical order are:

As part of its ongoing mission to promote small businesses, Independent We Stand created the “America’s Main Streets” contest to promote the important role Main Streets play in building economic success for their communities.