Trying to Turn Strife into Success

Each week, we like to share a merchant success story with our followers.  We are so happy for these businesses and wish them continued success, but we want to make sure that you, our readers, know that not all small business ventures are as textbook as they appear. This week, we would like to share with you the story of Webster’s Fine Stationers.   They have gone through some hard times, but through hard work and perseverance, Lori and Scott Webster are determined to turn their business around and remain competitve.

In 1926, Scott’s grandfather Harold “Frank” Webster opened Webster’s Pharmacy.  When Frank passed away, his son Bill took over at the age of 19.  Over the years, Bill expanded what was once just a pharmacy into a group of stores including a pharmacy, liquor store, stationery and office products store, greeting card store, video rental store, scrap booking store and a shipping outlet.

Unfortunately, beginning in the 1980’s, big box stores around the Pasadena, Calif. area began taking business away from independent retailers. The stores continued to lose money and customers until 2007 when Scott’s younger sister, who was running the family’s corporation at the time, decided each Webster family would purchase a “department” and run it on their own.

Only two families, Scott and Lori included, followed through and purchased stores.  The other family’s store went out of business last year and Lori and Scott are not doing much better. What once was the stationery department in a cluster of interconnected stores is now Webster’s Fine Stationers. The problem is, it was once a section of a larger store, so when Lori and Scott purchased the store, it was walled-off. “Customers absolutely hate the walls between the stores!” said Lori. “We’ve lost more than 50 percent of our former customer base.”

Though Webster’s is on the verge of bankruptcy, Lori and Scott are not going to give up because they know they have a lot to offer the Altadena community.  “We are Altadena's first and only lifestyle store. Webster's Fine Stationers offers much more than stationery,” said Lori. Webster’s offers home and office products that are unique, unusual and area-centric.  Lori and Scott have placed great emphasis on buying local merchandise for Webster’s.  You’ll find locally made jewelry, greeting cards, and stationery at Webster’s.

Over the past few years, Lori and Scott have lost many familial relationships, their health insurance, and a lot of money.  At big box stores, it’s all about the bottom line. That’s not the case at Webster’s - even though Lori and Scott are facing hard times, they still support the Quality of Life Center, Union Station Homeless Services and Friends in Deed. Independent We Stand is so passionate about promoting the “buy local” message because we want to help businesses that help others and support their community.

Next time you’re in the Pasadena area, stop by Webster’s Fine Stationers. Whatever you’re looking for, Lori and Scott will help you find it. You’ll walk out with something unique and a good feeling about helping out a local business. 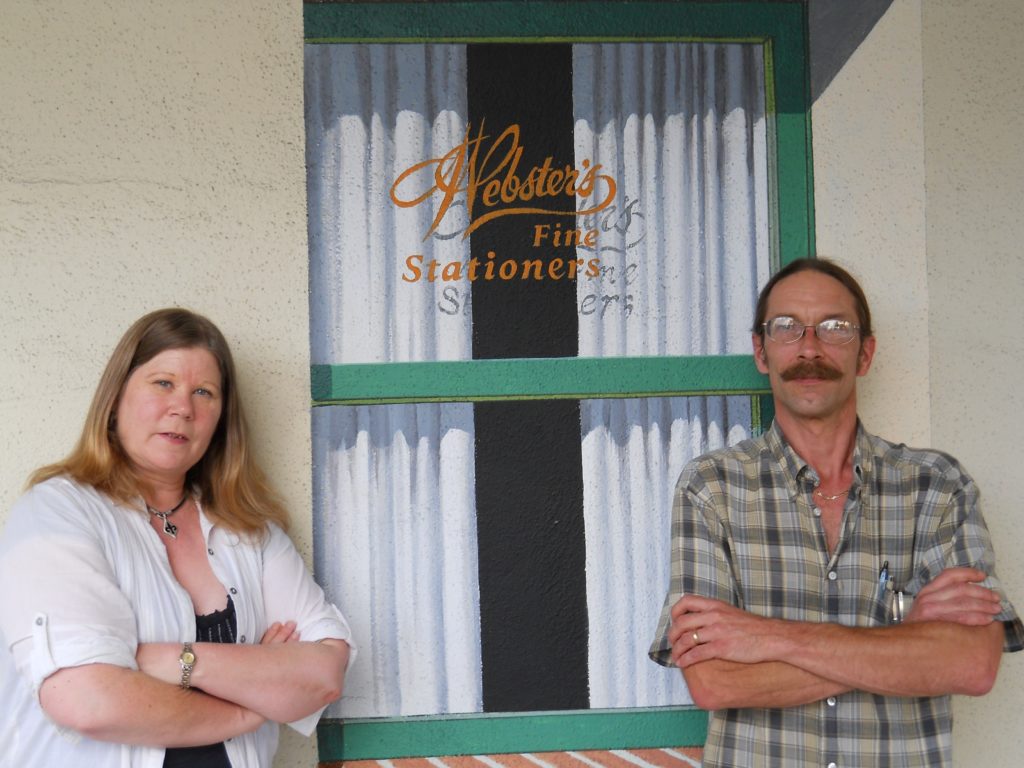 Lori and Scott against the windows they had painted on the front of Webster’s Fine Stationers by Gary Thomas, a local artist.