It truly takes a village to fight California wildfires. Last year, wildfires caused more than $10 billion in damage across California, making 2017 the costliest year for wildfire damage in U.S. history. The state’s firefighters are known as heroes far and wide for the brave and necessary work they do on the front lines, but here’s a story you may not know: Those crews are supported behind the scenes by small businesses like Willits Power and Hardware in northern California.

In reality, much of Willits Power and Hardware's work takes place outside those two stores. When there’s a wildfire in the area, the California Department of Forestry and Fire Protection, also known as Cal Fire, calls the Willits Power and Hardware team to support the relief effort. Last year, the store’s team responded to at least four fires, sending employees and resources to places like Yosemite, Santa Rosa and Sonoma.

“We provided generators and light towers for the camps,” says Tony Mondo, a store employee who spent several weeks at the fire crew’s base camp. “It’s like a small city they set up. There are shower trailers, laundry trailers, etc.” 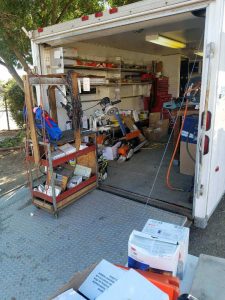 Mondo worked in Willits Power and Hardware's trailer, a mobile workspace where he and his teammates could repair the chainsaws and other small-engine equipment used by the firefighters.

“The trailer opens at 6 a.m. for saw support,” Mondo says. “You hand parts out and work on the chainsaws for 16-hour days. That goes on every day until they put the fire out. Then you sleep in a tent.” Mondo says he was lucky to get five hours of sleep before starting work again. The Willits Power and Hardware employees often spend two to three weeks at the camp. Although the conditions may seem grueling to many, Mondo enjoys the sense of community that exists in the camps.

“Everyone has a job that they do there,” he explains. “It’s pretty efficient and it feels good.”

Back in Willits, the rest of the store’s team keeps working, too. One recent fire knocked out power to the entire town, but Willits Power and Hardware didn’t close up shop.

“We had no credit card machines running, so we let people take stuff in good faith and come back to pay later,” says Misty Gonzales. “We never had an issue with somebody not coming back to pay. We also kept our doors open later.”

According to Gonzales, this type of unconventional support isn’t unusual in the community.

“In a small community, if you don’t step up when people need you in a time like that, people remember,” she says. “In our small community, there were stores all around that came together and did the sort of stuff we were doing.”

Mike Garrity, owner of Willits Power and Hardware, feels grateful to have employees who will step up when it matters most. Along with Mondo, Garrity went into the field to support fire crews, but he couldn’t have done so without a supportive team back at the store.

“They stepped up to the plate and took care of business while we were gone,” Garrity says of his team.

It’s not just the people who benefit from Willits Power and Hardware's community service. The store also raises money for animals that are displaced by disaster or need medical care. “We help supplement part of the bill so the owners don’t have to put their animals down,” Gonzales says.