From September to December local communities, from towns across the country, came together to nominate and vote for their favorite businesses. “The excitement and community support across the country was unmatched during this year’s nomination and voting phases,” said Bill Brunelle, co-founder of Independent We Stand. Further, the vast outpouring of support Mike’s Community Cup received during the Indie Awards is one of many examples of the loyalty their customers have shown for the store. One local high school rallied students, staff and the teachers to place their votes for Mike’s Community Cup.

Mike’s Community Cup goes above and beyond anyone’s expectations. In 2012, a local high school band received an invitation to play at the second inauguration of President Obama. The only problem was getting the band to Washington D.C. Mike Condon, owner of Mike’s Community Cup wasn’t going to let the students of Global Connection High School pass up that opportunity. Condon held a fundraiser at his coffee shop and was able to donate $1,400 to the trip of a lifetime.

More recently, Mike’s Community Cup donated all of their tips, for the day, to a young girl who was diagnosed with cancer and currently going through treatments. This young girl took giving back a step further by using the money to purchase toys for the kids in her hospital. Mike’s Community Cup is a true inspiration to all in the community, making it easy for their customers to sing their praises. 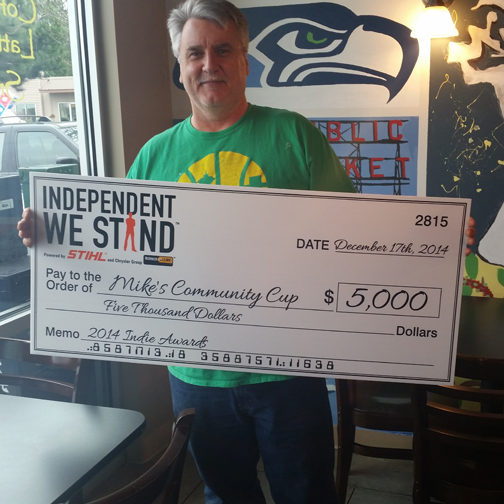 As the 2014 Independent Small Business of the Year, Mike’s Community Cup will receive prizes with a combined value of more than $10,000. Prizes include a $5,000 check, a $1,000 STIHL equipment certificate, redeemable at one of more than 8,000 local dealers nationwide, a “Small Business Web Starter Package” from independent web design firm Launch Interactive that includes custom website layout design and programming with a location page with Google map integration and web traffic reporting, a three day/two night stay at an  independent beach resort hotel in Virginia Beach Va., as well as a tour of the STIHL Inc. headquarters and dinner with the Independent We Stand team. The Indie Award winner will also receive a plaque to display at their business, and public relations and social media recognition.

Mike’s Community Cup was in good company among the other finalists in this year’s Indie Award contest. Each business that made it this far into the competition deserves to be recognized for their outstanding customer service and community support.

The ten businesses that received the highest number of public votes, in alphabetical order, are:

The 25 quarterfinalists who were not selected for the Grand Prize will each receive an Independent We Stand Premium Membership.

Thank you to everyone who showed their support by nominating a business, voting for a finalist, and promoting the contest. Your stories are what inspire us and give the “buy local” movement so much meaning.